Common Football Injuries: Groin and Hamstring StrainsGoing into Euro 2016, The Guardian newspaper described Coach Roy Hodgson’s England team as a “slick outfit”. In order to maintain that positive assessment, the onus is on the players to guard against injuries, both on and off the field. When a game is underway, a plethora of injury types can afflict footballers. 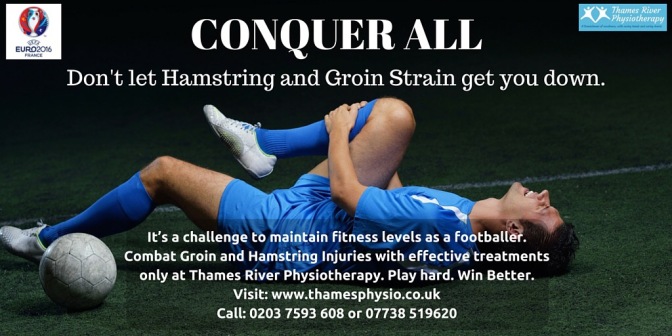 The fact that football calls for super-quick movements and sudden changes in direction heightens the risk of injuries. It has been estimated that 10-18% of all football injuries involve groin injuries.

Our bodies have five adductor muscles, namely: adductor brevis, longus, magnus, pectineus and gracilis. Groin strains are defined as muscular tears, or ruptures to one of these muscles. The adductor longus is the one that’s most often strained. It usually occurs when a player stretches, to kick the ball, for example. In doing so, the adductor muscles in the inner thigh are extended more than normal.

Apart from generating pain during movement, mild cases do not manifest as strain. The more serious cases are excruciating; and hinder basic activities such as walking or jogging due to loss of leg strength.

Physiotherapy is the most popular treatment for Groin Strains. Recovery period depends on whether the strain is mild, moderate or severe. Treatment methods include:

We have four Hamstring muscles: semimembranosus and semitendinosus (medially) and biceps femoris – short and long heads (laterally). A tear in these is known as a hamstring strain that ranges in severity from mild to high.

Some of the more common reasons for the occurrence of hamstring injuries include: Poor timing-intermuscular coordination and eccentric strength in the hamstring muscles; poor running mechanics; improper warm-up; inappropriate training loads and lower back pathology.

Physiotherapy is highly effective for Hamstring. Treatments are aimed at:

Thames River Physiotherapy offers treatments and therapies of various kinds. Many of these are tailored to specifically address sports injuries in both amateur and elite professionals in different games. We use a wide range of techniques to help accelerate recovery. Apart from this, we provide running assessment and coaching, biomechanics assessment, Pilates and sports massage as preventive treatment programs.

This website uses cookies to improve your experience while you navigate through the website. Out of these cookies, the cookies that are categorized as necessary are stored on your browser as they are essential for the working of basic functionalities of the website. We also use third-party cookies that help us analyze and understand how you use this website. These cookies will be stored in your browser only with your consent. You also have the option to opt-out of these cookies. But opting out of some of these cookies may have an effect on your browsing experience.
Necessary Always Enabled
Necessary cookies are absolutely essential for the website to function properly. This category only includes cookies that ensures basic functionalities and security features of the website. These cookies do not store any personal information.
Non-necessary
Any cookies that may not be particularly necessary for the website to function and is used specifically to collect user personal data via analytics, ads, other embedded contents are termed as non-necessary cookies. It is mandatory to procure user consent prior to running these cookies on your website.
SAVE & ACCEPT