When it comes to macho sports, rugby definitely tops the list. Due to the nature of the game ― fast-paced and adrenalin pumping as it is, rugby players are prone to injuries of various kinds. It is estimated that one in four rugby players are susceptible to injury in every playing season. A more revealing study states that rates of injury in rugby are almost three times higher than that found among soccer players.]] 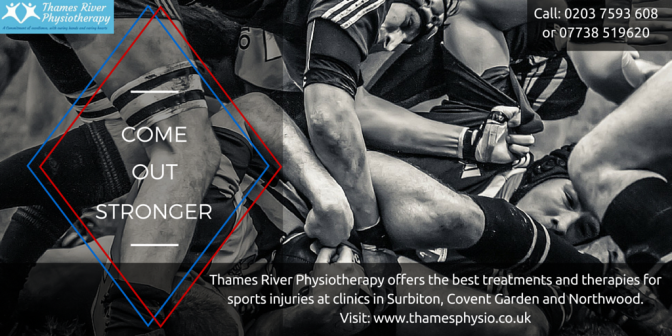 In a full-length match, each player performs between 20- 40 tackles on average. This is where the specter of injury raises its head, as an experience lag between the two opposing front rows result in about 25 percent of neck injuries.

A lower ranked or less skilled team within the division, a forward position, being tackled, and beginning of the season are identified as risk factors for rugby injuries. So, it is amply evident that a majority of the injuries take place on the field, more often during the second half of the game, than while training.

Because of the frequent physical contact, the incidence of collision injury is relatively high with the upper limbs and head most frequently injured.

Recent research described the incidence of injury in Rugby Union as 17 injuries per 1000 hours of playing, with match injuries much more frequent than training injuries.

Who Bears the Brunt of Injuries?

The most common kind of injuries are  muscular strains or contusions (bruising) that account for 40 percent; while up to 30 percent are attributed to sprains, fractures, lacerations and dislocations. Concussions alone make-up 44 percent of head injury figures.

So let’s break these enormous percentages down:

It’s not surprising then that ankle sprains that constitute one in seven rugby injuries. Further, anywhere between 5-25 percent are head injuries; and this includes concussions. 35 percent injuries are fractures, with that of the clavicle turning up 24 percent. The remainder is listed as superficial injuries at 20 percent and head injuries and sprains concluding the count at 16 percent.

Role of a Physiotherapist

Given that rugby is an action-packed sport, as described already, and the injuries the involvement in such a game brings; a physiotherapist is a critical healthcare professional in the scheme of things. The treatment one can avail is two pronged ― injury care and rehabilitation. Nowadays though, a third segment, injury prevention, has made its debut in this regard.

Among the many types of injuries discussed above, those that are serious in nature will most certainly require immediate visit to A&E. However, for other injuries, the first line of treatment should be PRICE (Protection, Rest, Ice, Compression and elevation) for the first 48 hours.

Lower back pain is yet another issue for many athletes. Although the causes vary, the basic one is bad posture when lifting weights or shifting position. By using the right techniques, strengthening exercises and stretches sportspersons can overcome such aches and pains.

With the aid of tried and tested treatment routines, physiotherapist rehabilitation is designed to help individuals return to the sport they love much quicker.

Thames River Physiotherapy offers treatments and therapies of various kinds. Many of these are tailored to specifically address sports injuries in both amateur and elite professionals in different games. We use a wide range of techniques to help accelerate recovery. Apart from this, we provide running assessment and coaching, biomechanics assessment, Pilates and sports massage as preventive treatment programs.

Any cookies that may not be particularly necessary for the website to function and is used specifically to collect user personal data via analytics, ads, other embedded contents are termed as non-necessary cookies. It is mandatory to procure user consent prior to running these cookies on your website.

Due to the recent global health pandemic in which we find ourselves, Thames River Physiotherapy team recognises that many clients will be reticent to attend face to face treatment sessions at our clinics.

We are therefore happy to offer video-based treatment to clients at this point in time. This is to make sure that you can get care and treatment without getting exposed to COVID-19.

What is Virtual Online Physiotherapy?

Thames River Physiotherapy's virtual online physiotherapy service will put you in contact with one of our specialist physiotherapists via a video call.

Our team of physiotherapists will provide you the best evidence based guidance, individualised to your abilities, needs and pain levels. Together we will help you progress your rehabilitation goals.

How Do I Book a Virtual Online Session?

30 minute and 1 hour video sessions are available at 50% of our regular physiotherapy rates. You will receive instructions for the video call service along with the confirmation of your appointment time.

Am I Covered by Medical Insurance?